Analysis of Plagiarism in the Draft Alberta K-6 Curriculum

This post was first published by Dr. Sarah Elaine Eaton on April 3, 2021 on https://drsaraheaton.wordpress.com/2021/04/03/analysis-of-plagiarism-in-the-draft-alberta-k-6-curriculum/.

Since the draft of Alberta’s new K-6 curriculum was released by Adrianna LaGrange last week it has been under scrutiny. One of the concerns is plagiarism. Teachers have been posting examples of alleged plagiarism on social media and sending them to me directly for analysis. To be honest, my inbox exploded last week and I can hardly keep up. I lost track of all the messages I received via e-mail and social media, but I estimate that at least 100 examples have been sent to me, some of which are duplicates. In this post, I offer my analysis of a few of these examples.

In the interest of full transparency, I am not, nor have I ever been, a teacher in the K-12 system. My teaching career has been in higher education. I earned a PhD in educational leadership and my research expertise is on academic misconduct including plagiarism and contract cheating. My peer-reviewed scholarly papers include this one in which I analyze definitions of plagiarism. I serve as the Editor-in-Chief of one of the most respected journals in the field, the International Journal for Educational Integrity, published by BMC Springer Nature. I also serve on a multi-country working group for educational policy focused on academic integrity, through the European Network for Academic Integrity. My latest book, released just last month, focuses specifically on plagiarism. And I am one of two Canadians to hold a seat on the 40-person global Committee on Publication Ethics (COPE) Council. In other words, I am more than qualified to undertake an analysis of alleged plagiarism.

There is no single way to detect plagiarism or declare definitively that it has occurred. There are text-matching software products (e.g., Turnitin) that can find exact matches between two texts quickly. Human detection can also be highly effective, particularly when the individual investigating the case(s) is qualified and experienced, as in my case. In my analysis, I have conducted a manual analysis of individual examples, unaided by any software.

Purpose of this Review

My goal with this review is (1) to determine if there is plagiarism in the Draft Alberta K-6 Curriculum from my perspective as an expert researcher on this topic; (2) to provide a base of evidence for further dialogue among Alberta citizens, including educators and policy makers; and (3) to offer recommendations and next steps.

My goal is not to critique the content of the draft curriculum. Others, such as Dr. Carla Peck, have already done an excellent job of that. In my inquiry, I focus specifically on the issue of plagiarism.

In the sections that follow, I offer my analysis of some examples from the Draft Alberta K-6 Curriculum. These examples are not exhaustive, and nor are they meant to be. My inbox has been filling up with examples teachers have sent to me over the past week. I simply do not have time to analyze all of these examples for plagiarism that have been sent to me from the draft AB Curriculum; there are too many. I have randomly selected some and analyze them in depth.

I conducted my analysis April 1 – 3, 2021. It is possible that some of the draft text may have changed during that time. It is easy to change digital text online. Some websites, such as Wikipedia, track every change that is made to text. In other cases, it can be difficult to track how digital text was changed on some websites unless captures of previous versions were taken using tools such as the Wayback Machine Internet Archive. Screen shots can help capture how a text looks on a website at a given moment in time, so I have included screen shots in my analysis, along with a date and timestamp to further validate the work.

I have verified and carefully reviewed each one. Below I offer specific and detailed analysis of individual cases.

The first example is from the draft physical education curriculum. The specific passages in question, come from the text of the draft Grade 2 curriculum: 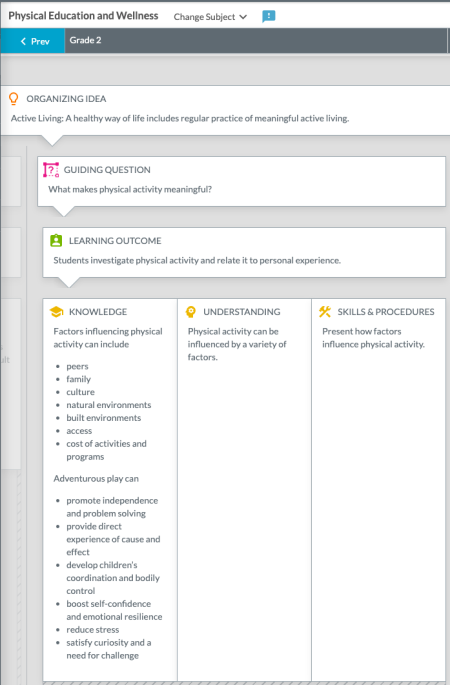 The text of the draft curriculum bears a striking resemblance to this text from the North Vancouver Recreation Centre:

“Adventurous play is sometimes called risky play. It is defined as thrilling and challenging forms of play that involve a risk of physical injury. Each time a child has a minor accident, learning and adaptation happen. The benefits of adventurous play are numerous. Challenging play:

Analysis: The two texts are remarkably similar. Although some words have been changed, the substance of the content is largely the same. Also, the items in the list are in pretty much the same order in both cases.

Conclusion: This content should have been attributed to the North Vancouver Recreation Centre. Without attribution, this would be classified as plagiarism.

Educators have e-mailed me with numerous concerns about plagiarism in the draft social studies curriculum. In this example, the text in question comes from the Grade 6 draft curriculum:

“The religious affiliation of most Albertans is Christian, and the largest denominations are Roman Catholic, United, Anglican, Lutheran, and Baptist churches.”

The text of the draft curriculum is very similar to text that appears on the Wikipedia page for the Demographics of Alberta:

“Over 60 percent of Albertans identify as Christian, while almost 32 percent of residents identify with no religion. The largest denominations are the Roman Catholic, United, Anglican, Lutheran, and Baptist Churches.”

Analysis: The similarities between the two texts is obvious. What was not immediately obvious was whether the Wikipedia text had been changed recently to make it look as if plagiarism had occurred after the draft had been released. I took a look at the revision history of this Wikipedia page (which is openly available to everyone on the Internet).

It does not appear to me as though the page was maliciously modified after the draft curriculum was released. (Note: In this blog post from 2012, I state openly that I do not consider Wikipedia to be reliable source material for academic work. This would include curriculum development.)

Conclusion: Although this is a short passage, its similarity to the Wikipedia page is close enough that attribution should be provided. In cases such as Wikipedia, attribution should include a “retrieved from” date to indicate when the source material was consulted. Without attribution, this could be classified as plagiarism.

In this example, the text in question comes from the Grade 6 draft curriculum, under the knowledge section:

“A popular theory, proposed as a way of drawing a distinction between two different societies, the United States and Canada: It suggests that there is a difference between the Canadian mosaic, where ethnic groups have maintained their distinctiveness while functioning as part of the whole, and an American melting pot, where peoples of diverse origins have allegedly fused to make a new people.” (p. 32)

Original text: The text above is an exact duplication of text published in a 1976 article authored by Howard Palmer, published in the International Journal.

Conclusion: The original author’s words have been duplicated without attribution. This is an obvious case of word-for-word plagiarism.

I have identified several different sources in my brief analysis. This indicates that content has been lifted or borrowed from multiple original sources, not just one or two. Others have commented that additional source material might have come from CoreKnowledge and specifically, the Core Knowledge Sequence.

The approach of taking bits and pieces of others’ content and stitching it together into an allegedly new document is called patchwriting, a term used extensively by plagiarism scholars such as Rebecca Moore Howard and Diane Pecorari. Patchwriting happens when writers lack the skills or confidence to paraphrase effectively and is widely regarded as an indication that the writer needs support.

This draft curriculum is a patchwork of material pulled from different sources. Plagiarism happens when source material is not attributed. A basic tenet of academic and research integrity is to give credit where it is due. In this draft curriculum, there is little to no indication of acknowledgement of those whose ideas and words contributed to its development. It appears as though the draft of Alberta’s new K-6 curriculum is rife with plagiarism.

Critics will no doubt jump on the fact that I have analyzed only three examples in this article. Although that is true, I began this post by saying that Alberta teachers have e-mailed me dozens and dozens of passages from the new curriculum that they believe have been plagiarized from a variety of sources. It actually isn’t my job to detect plagiarism in the new curriculum; it is up to the Alberta government to do that. I have provided enough examples here to show that further investigation is warranted, as is further discussion. There is much more to analyze than I had the time to do in a few days. It was important to me to get this post published so as to inform an evidence-based dialogue.

The solution for plagiarism is easy: Cite the original source material. Here are three easy steps to fix the plagiarism in the draft of Alberta’s new K-6 curriculum:

Step 1: Identify content replicated or paraphrased from other sources. This will require a line-by-line review of the entire draft curriculum.

Step 2: Document where the original source material came from. Keep detailed notes of who wrote the content, as well as when and where it was published.

Step 3: Cite and reference all the sources consulted in the development of the curriculum. (If you need a refresher on the difference between citing and referencing, I explain it in this post.)  In the References below I have provided details of the original sources I consulted to conduct my analysis for this blog post. I have used APA formatting, but any format would be fine. The key is to publicly show what source material was consulted and give credit to the original authors. Give credit where it is due. In many cases, plagiarism is entirely preventable.

The draft of Alberta’s new K-6 curriculum for English Language Arts and Literature states that:

“Ethical use of information includes

These are skills that the Alberta government wants children in Grades 4 (p. 42) and Grade 5 (p. and p. 63) to learn. Surely if we are asking children in grades 4 and 5 to demonstrate the skills of ethical use of information, we should expect the same of the adults who develop the curriculum.

Acknowledgements: I wish to acknowledge all those who sent me examples of problematic passages in the new draft curriculum via e-mail or social media. Some of you wish to remain anonymous, so I conclude with a general note of thanks to everyone who has contributed to this inquiry. I am sorry I do not have time to analyze all of your examples, but I appreciate you sending them to me.

Palmer, H. (1976). Mosaic versus melting pot?: immigration and ethnicity in Canada and the United States. International Journal, 31(3), 488. Retrieved from https://search.proquest.com/docview/1290345770?pq-origsite=gscholar&fromopenview=true&imgSeq=1#

Dr. Eaton is an Associate Professor in the Werklund School of Education at the University of Calgary.